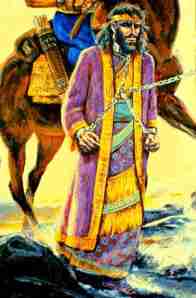 Why study the book of Daniel? Daniel teaches us that it is possible to live in a world ran by Babylon and still be faithful to God. This truth is a point that needs to be taken to heart by all believers. We know there is hope, Daniel is a reminder that even though the people of Israel went through tough times God was always with them.

We see in the first two verses of Daniel that God had allowed Jehoiakim’s rein to end. Jehoiakim was placed on the throne but the Egyptian king, and his name was even changed from Eliakim. We also see in (2 Kings 23:29-34) that Jehoiakim had to pay a heavy tax to Egypt. As the king of Israel he was to be the spiritual leader of his people but sadly enough he was not.

We know from the Babylonian records that Nebuchadnezzar was not the king of Babylon as of yet so even though Daniel calls him King this did not happen for at least a month or so following the capture of Jehoiakim.

Now as for the articles of the house of God that Nebuchadnezzar carried he would have used them to in the temple of his god, Marduk, I am sure he would have taken the finest of the articles and left a small amount to be use by the Jews left behind.

The land of Shinar which verse 2 talks about was most likely a name used for Babylon. However in (Gen. 14:1, 9) it seems that this name is used for an area in northern Mesopotamia. But in (Gen. 11:2; Isa. 11:11) this area is definitely Babylon.

So why add Ellen White Statements in to the study? While as Seventh-day Adventist we do not hold her writings on the same level as the scriptures, and I do believe she can give us much insight on this topic.   Her writing also makes it clear that the Bible is the standard by which all teaching must be tested.

“Read the book of Daniel. Call up, point by point, the history of the kingdoms there represented. Behold statesmen, councils, powerful armies, and see how God wrought to abase the pride of men, and lay human glory in the dust. God alone is represented as great. In the vision of the prophet He is seen casting down one mighty ruler, and setting up another. He is revealed as the monarch of the universe, about to set up His everlasting kingdom—the Ancient of days, the living God, the Source of all wisdom, the Ruler of the present, the Revealer of the future. Read, and understand how poor, how frail, how short-lived, how erring, how guilty is man in lifting up his soul unto vanity….”

“The light that Daniel received direct from God was given especially for these last days. The visions he saw by the banks of the Ulai and the Hiddekel, the great rivers of Shinar, are now in process of fulfillment, and all the events foretold will soon have come to pass.” {4BC 1166}

Because of their rebellion to God and His commandments “the LORD scattered His people. Just imagine what it must have been like during this time, your king has just been taken by Babylon and God’s prophets are telling you that you will be taken in to captivity for 70 years and your world has just been thrown in to chaos.

This entry was posted on October 30, 2011 by bobh6 in Daniel and tagged Babylon, Daniel, Ellen White, Jehoiakim, Nebuchadnezzar, religion, righteousness by faith.