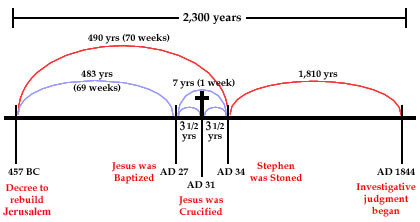 20 Now while I was speaking, praying, and confessing my sin and the sin of my people Israel, and presenting my supplication before the LORD my God for the holy mountain of my God, 21 yes, while I was speaking in prayer, the man Gabriel, whom I had seen in the vision at the beginning, being caused to fly swiftly, reached me about the time of the evening offering. 22 And he informed me, and talked with me, and said, “O Daniel, I have now come forth to give you skill to understand. 23 At the beginning of your supplications the command went out, and I have come to tell you, for you are greatly beloved; therefore consider the matter, and understand the vision:

For your people and for your holy city,

To finish the transgression,

To make an end of sins,

To make reconciliation for iniquity,

To bring in everlasting righteousness,

To seal up vision and prophecy,

And to anoint the Most Holy.

That from the going forth of the command

To restore and build Jerusalem

Until Messiah the Prince,

There shall be seven weeks and sixty-two weeks;

The street shall be built again, and the wall,

Even in troublesome times.

26 “And after the sixty-two weeks

Messiah shall be cut off, but not for Himself;

And the people of the prince who is to come

Shall destroy the city and the sanctuary.

The end of it shall be with a flood,

And till the end of the war desolations are determined.

27 Then he shall confirm a covenant with many for one week;

But in the middle of the week

He shall bring an end to sacrifice and offering.

And on the wing of abominations shall be one who makes desolate,

Even until the consummation, which is determined,

Is poured out on the desolate.”

So we see in (v. 20-21) that Gabriel is sent back to Daniel and tells him that he has returned to give him understanding, just as Daniel has asked for.

We see that in the vision of (Chapter 8) four prominent things are brought in to view: the Ram, the He-Goat, the Little Horn, and the period of 2300 days.  But all except one were explained but Gabriel before so which one of the four elements still needed explaining? It was the 2300 days for (8:14).

Before we begin, remember we must test everything, each event must match with the timeline given or it cannot be the correct application. Only if the prophecy is to be accurate then all events must be fulfilled one after the other.

He starts of in (v. 24) saying “Seventy weeks are determined”, what are the 70 weeks Gabriel speaks of? Well first we must understand that in biblical terms a day equals a year (you can explanation of the prophetic day-for-a-year principle in (Ezekiel 4:6 and Numbers 14:34.) so the 70 weeks would be 7 days x 7 weeks = 490 days or 490 prophetic years.

So it would seem that 70 weeks or 490 years were allotted to Jerusalem and the Jews. So now that leads us to so many more questions like;

Well you get the point.

Where does the 70 weeks begin? For this prophecy to be tested, we need a starting point and dates to test it with. We see that the date was to go from the commandment to restore and build Jerusalem. (v. 25) says “Know therefore and understand, that from the going forth of the command to restore and build Jerusalem until Messiah the Prince, there shall be seven weeks and sixty-two weeks; The street shall be built again, and the wall, even in troublesome times.” So we not only see a starting point but an ending point as well. Thus we have a double test provided to see if the application of this prophecy accurate.

Ok, once again to help shorten this post we are only going to look at the decree of Artaxerxes in 457 B.C., if anyone wishes to discuss the rest of the dates we can do this through our continuing discussion.

So now we have the start date we need to test it and insure that we have the right one. We need to look forward 490 years and see what event if any happened then.  Stephen, a righteous deacon, was publicly stoned in A.D. 34. From that date onward the Jews, because they rejected Jesus and God’s plan, were no longer God’s chosen people or nation. Instead, God now counts people of all nationalities who accept and serve Him as spiritual Jews. They have become His chosen people–“heirs according to the promise.” Spiritual Jews do, of course, include Jewish people who individually accept and serve Jesus (Galatians 3:27-29; Romans 2:28, 29).

Ok, we have an event that starts and an event that finishes the timeline, but are there any other dates that can help us to insure we have the proper understanding?  The angel spoke of 69 prophetic weeks, or 483 years (69 x 7 = 483), added to 457 B.C. would reach to the Messiah (Daniel 9:25). The question is did it?  Yes, we see that when we move ahead 483 full years from the fall of 457 B.C. reaches the fall of A.D. 27. We see that Jesus the “Messiah” which means “anointed” was anointed and if we read (John 1:41, margin). We see that Jesus was anointed with the Holy Ghost (Acts 10:38) at His baptism (Luke 3:21, 22). His anointing took place in the 15th year of the reign of Tiberius Caesar (Luke 3:1), which was A.D. 27. So once again the dates prove that the application of the prophecy is correct. We see that this prediction was made more than 500 years before!

Now Jesus begins to preach and we see that once again “the time is fulfilled” (referring to the 483 years which were to reach to the Messiah). He also confirmed the prophecy (Mark 1:14, 15; Galatians 4:4). So Jesus actually began His ministry by clearly referring to the 2,300-day prophecy, stressing its importance and accuracy.  To me that is truly amazing and we now have evidence that proves the following statements:

But we are not finished; we still have 1 week or 7 years left in the 490-year prophecy. (v. 27) tells us that the Messiah will “confirm a covenant with many for one week; but in the middle of the week He shall bring an end to sacrifice and offering.” Well we know that Jesus started His ministry in the autumn of A.D. 27 and if we look at the following verses we see that there are four Passovers referenced (John 2:13; 5:1; 6:4; 13:1) (the last Passover He was crucified) we see that his public ministry ended in A.D. 31 so it lasted 3 ½ years. So as we see, we have one more part of the prophecy fulfilled. And as we discussed before, we see that Stephen was martyred in the autumn of A.D. 34, this brings us to the end of the 490 days.

“In the eighth chapter of Daniel he could find no clue to the starting point of the 2300 days; the angel Gabriel, though commanded to make Daniel understand the vision, gave him only a partial explanation. As the terrible persecution to befall the church was unfolded to the prophet’s vision, physical strength gave way. He could endure no more, and the angel left him for a time. Daniel “fainted, and was sick certain days.” “And I was astonished at the vision,” he says, “but none understood it.”

Yet God had bidden His messenger: “Make this man to understand the vision.” That commission must be fulfilled. In obedience to it, the angel, sometime afterward, returned to Daniel, saying: “I am now come forth to give thee skill and understanding;” “therefore understand the matter, and consider the vision.” Daniel 8:27, 16; 9:22, 23, 25-27. There was one important point in the vision of chapter 8 which had been left unexplained, namely, that relating to time—the period of the 2300 days; therefore the angel, in resuming his explanation, dwells chiefly upon the subject of time:  {GC 325}

Daniel stated that the sanctuary in heaven would be cleansed after 2,300 prophetic days, or 2,300 literal years. And Gabriel returned assuring Daniel that sin and the little horn power would not continue to prosper and persecute God’s people forever. Instead, in 2,300 years God would step in with the heavenly Day of Atonement, or judgment, where sin and sinners would be identified and later removed from the universe forever. Thus the universe will be cleansed from sin.