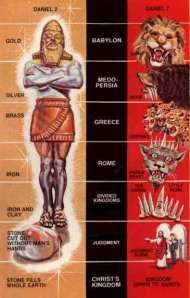 Vision of the Four Beasts

1 In the first year of Belshazzar king of Babylon, Daniel had a dream and visions of his head while on his bed. Then he wrote down the dream, telling the main facts.

2 Daniel spoke, saying, “I saw in my vision by night, and behold, the four winds of heaven were stirring up the Great Sea. 3 And four great beasts came up from the sea, each different from the other. 4 The first was like a lion, and had eagle’s wings. I watched till its wings were plucked off; and it was lifted up from the earth and made to stand on two feet like a man, and a man’s heart was given to it.

5 “And suddenly another beast, a second, like a bear. It was raised up on one side, and had three ribs in its mouth between its teeth. And they said thus to it: ‘Arise, devour much flesh!’

6 “After this I looked, and there was another, like a leopard, which had on its back four wings of a bird. The beast also had four heads, and dominion was given to it.

7 “After this I saw in the night visions, and behold, a fourth beast, dreadful and terrible, exceedingly strong. It had huge iron teeth; it was devouring, breaking in pieces, and trampling the residue with its feet. It was different from all the beasts that were before it, and it had ten horns. 8 I was considering the horns, and there was another horn, a little one, coming up among them, before whom three of the first horns were plucked out by the roots. And there, in this horn, were eyes like the eyes of a man, and a mouth speaking pompous words.

Today we start the predictive chapters of Daniel. The time frame for this vision would have been about 533 B.C. during the time of chapter 5.

The language used is symbolic and we will go over each of the symbols as we come to each one.

Let’s start with (v. 2) Daniel saying, “I saw in my vision by night, and behold, the four winds of heaven were stirring up the Great Sea. What are the four winds? The winds are represents strife, political commotion, and war, we see this (Jeremiah 25:32-33) and because of this whirlwind kingdoms will rise and fall due to war and political strife.

In (v. 3) we see Daniel seeing four great beasts that come from the sea. The beasts represent the kingdoms and the sea represents the people, and nations, we can draw this conclusion from (Isaiah 17:12-13; Revelation 17:15). And when we put these two verses together, we see Daniel is talking about the succession of the world empires and there rise and fall due to war.

What does the first beast represent? Daniel says it “was like a lion, and had eagle’s wings.” The lion is the king of the beast and as we saw in (Daniel 2) Babylon was the greatest of all the kingdoms. But Daniel saw something strange happing to the beast the wings were plucked off, after Nebuchadnezzar’s death, the kingdom of Babylon went in to a steady spiral down.

Next Daniel saw a second beast, and looked like a bear. This beast represented Medo-Persia. But why was one side raised up? It was said that the Persia elements of this empire was much stronger. And the three ribs in its mouth between its teeth? It was the three countries of Babylon, Lydia and Egypt.

But now we move to the leopard, which Daniel says it had four wings of a bird on its back and it also had four heads. This would represent Greece. If you noticed the first beast also had wings and like the Babylon, Greece conquered its lands quickly. And the four heads at his death Alexander the great had four generals and just before he died it was reported that when asked who would rule after him, he replied “the strongest” because of this, twenty years of civil war would follow Alexander’s death.

Now we move to the last beast, one that looked like no other beast on Daniels time. He said that it was “dreadful and terrible, exceedingly strong. It had huge iron teeth”…It was different from all the beasts that were before it, and it had ten horns. This beast was to become the Roman, the Roman Empire was strong and cruel, but what about the 10 horns? Ten horns were the fragments of the Roman Empire after the fall of the Caesars. In his Horae Apocalypticae Elliott lists these as; Anglo-Saxons, Alemanni, Franks, Visigoths, Suevi, Burgundians, bavarians, Heruli, Vandals, and Ostogths.

But there is still one more horn in (v. 8 ) Daniel sees a little one coming up among them. And three of the other horns were plucked out by the roots. But this horn was different from the others; it had eyes like the eyes of a man, and a mouth speaking pompous words. The angel told Daniel that this horn would uproot three horns or kingdoms and they were Heruli, Vandals and Ostrogoths. These were the three that did not recognize Christ as eternal, but claimed that he was created.

“As we near the close of this world’s history, the prophecies recorded by Daniel demand our special attention, as they relate to the very time in which we are living. With them should be linked the teachings of the last book of the New Testament Scriptures. Satan has led many to believe that the prophetic portions of the writings of Daniel and of John the revelator cannot be understood. But the promise is plain that special blessing will accompany the study of these prophecies. “The wise shall understand” (verse 10), was spoken of the visions of Daniel that were to be unsealed in the latter days; and of the revelation that Christ gave to His servant John for the guidance of God’s people all through the centuries, the promise is, “Blessed is he that readeth, and they that hear the words of this prophecy, and keep those things which are written therein.” Revelation 1:3.

From the rise and fall of nations as made plain in the books of Daniel and the Revelation, we need to learn how worthless is mere outward and worldly glory. Babylon, with all its power and magnificence, the like of which our world has never since beheld,—power and magnificence which to the people of that day seemed so stable and enduring,—how completely has it passed away! As “the flower of the grass,” it has perished. James 1:10. So perished the Medo-Persian kingdom, and the kingdoms of Grecia and Rome. And so perishes all that has not God for its foundation. Only that which is bound up with His purpose, and expresses His character, can endure. His principles are the only steadfast things our world knows.

A careful study of the working out of God’s purpose in the history of nations and in the revelation of things to come, will help us to estimate at their true value things seen and things unseen, and to learn what is the true aim of life. Thus, viewing the things of time in the light of eternity, we may, like Daniel and his fellows, live for that which is true and noble and enduring. And learning in this life the principles of the kingdom of our Lord and Saviour, that blessed kingdom which is to endure for ever and ever, we may be prepared at His coming to enter with Him into its possession.” {PK 547 – 548}

We see a direct correlation between Chapter 2 and Chapter 7, so why do we need Chapter 7 when Daniel had already interrupted Nebuchadnezzar’s dream about 40 years prior? Chapter 7 not only shows the succession of the kingdoms, we see more of their characteristics from this chapter.

Spend some time with this chapter over the next few days and give me your thoughts.