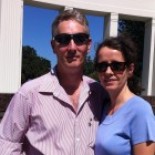 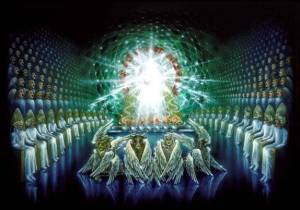 “thrones were set in place,

and the Ancient of Days took his seat.

His clothing was as white as snow;

the hair of his head was white like wool.

His throne was flaming with fire,

and its wheels were all ablaze.

10 A river of fire was flowing,

coming out from before him.

Thousands upon thousands attended him;

The court was seated,

and the books were opened.

11 “Then I continued to watch because of the boastful words the horn was speaking. I kept looking until the beast was slain and its body destroyed and thrown into the blazing fire. 12 (The other beasts had been stripped of their authority, but were allowed to live for a period of time.)

13 “In my vision at night I looked, and there before me was one like a son of man, coming with the clouds of heaven. He approached the Ancient of Days and was led into his presence. 14 He was given authority, glory and sovereign power; all nations and peoples of every language worshiped him. His dominion is an everlasting dominion that will not pass away, and his kingdom is one that will never be destroyed.

At this point Daniel’s attention was directed towards the heavens. He saw the Ancient of Days in judgment near the End of Time. What I found it interesting is that the Scriptures refer to God’s great judgment more than a 1000 times. And that almost every Bible writer gives some reference to it. But Daniel reference to it is the most descriptive in the Bible.

John saw the same thing in (Revelation 5:11) “Then I looked and heard the voice of many angels, numbering thousands upon thousands, and ten thousand times ten thousand. They encircled the throne and the living creatures and the elders.” This is the work of judgment and what is called, the investigative Judgment. The books are opened and the all come up to examination before the great tribunal (we will discuss the topic of the investigative judgment later).

A Period or Season – literally, “an appointed time” from the root meaning “to determine,” “to Decree” it appears that the word ‘season’ in the text is being used in an indefinite sense, rather than as a representation of 3 months.

Time – this word ‘time’ is the same word found in Dan 4:16, where it is commonly considered to mean ‘year’.

When we think about the judgment we think of a court room with a judge, lawyers and maybe a jury, but during the time of Daniel and John the courts were quite different. A group of associates would set in a semicircle; Daniel was given a view of this and it was He who presides in the judgment. Then in (v. 13) the son of man appears to perform the work. Again we see the investigative judgment, because all the evidence is laid out and the judgment will be decided for every man.

One question that always comes up is when does this take place? Many believe that it will happen after the return of Christ but we read in (Revelation 22:12) that He brings His reward with Him. So this statement would indicate that the destiny of every soul will be settled before the 2nd coming.

The Bible does not teach that everyone will be saved, but it does say that all will appear before the judgment seat of Christ (2 Cor. 5:10). While He is our advocate, He is also our judge. (John 5:22, 27).

“Above the distractions of the earth He sits enthroned; all things are open to His divine survey; and from His great and calm eternity He orders that which His providence sees best.

“The way of man is not in himself: It is not in man that walketh to direct his steps.” “Trust in the Lord with all thine heart…. In all thy ways acknowledge Him, and He shall direct thy paths.” “The eye of the Lord is upon them that fear Him, upon them that hope in His mercy; To deliver their soul from death, and to keep them alive in famine.” “How precious is Thy loving-kindness, O God! … The children of men take refuge under the shadow of Thy wings.”

“Happy is he that hath the God of Jacob for his help, Whose hope is in the Lord his God.”             “The earth, O Jehovah, is full of Thy loving-kindness.” Thou lovest “righteousness and justice.” Thou “art the confidence of all the ends of the earth, and of them that are afar off upon the sea: Who by His strength setteth fast the mountains, being girded about with might; Who stilleth the roaring of the seas,… and the tumult of the peoples.”     “Thou makest the outgoings of the morning and evening to rejoice.”

“Thou crownest the year with Thy goodness; And Thy paths drop fatness.”            “The Lord upholdeth all that fall, and raiseth up all those that be bowed down. The eyes of all wait upon Thee; And Thou givest them their meat in due season. Thou openest Thine hand, and satisfiest the desire of every living thing.” {MH 417 – 418}

I have a question for you. Is this judgment just for every man and woman? For this answer let’s look at (Revelation 14:7). The central issue in the judgment is the vindication of the character of God before the universe. Not only are we to be on trial but God Himself will stand and show the universe that He is a just and merciful God.